nxcore.org website to a nasty hacker hit, I am in the process of rebuilding it and giving it a facelift and more up to date look. nxcoreorg is the server farm hosting the world wide nxdn network connections for the Icom and Kenwood networks. The last heard lists and other information along with the code will get a fresh look and once over by the nxcore developers and admins after the new year. More on this when it comes. Stay tuned here for more information.

Here is a valid suggestion submitted to the community;

One thing I would like to see addressed is the ability to send and receive messages through connected repeaters.  NXDN Messaging is a very powerful tool!  I have a Windows messaging app I will be bringing to the Hamfest this weekend that could reduce reliance on the Internet for Hams with NXDN radios.  The ability to implement it here in West Central Florida is limited to the reach of the single repeater your station can hit.  We need to be able to overcome that limitation to make NXDN messaging more universally accepted.  Think about the potential impact for SKYWARN.

here is the reply and my comments
(I would like to hear from others too!)

You bring up a good point Paul, but I have been battling this for a while now.

While I can send data like the D-RATS terminal program on NXDN via the voice stream,
The SMS data is a bit more complex. The ETSI standards for it only talk about the SU through the rptr to SU, but very little of it is in the conventional code for multi-site transport. I will see if I can reach out to the Japan and get some more input put into this, while I do know that Type C Trunking will carry it out, I also know that an IP NXDN CONSOLE can So the same thing. Though the flow chart is IP to SU by way or the repeater, I think with a work on the IP side and some data runs and captures via ICOM NXDNIP protocol, this can be achieved for 2020. We have a diverse group of people who are good with code and can come up with something to make it work.

Keep in mind, standard sms is 1024 character, while EXTENDED sms is 4096.
Truncated CONSOLE NWS messages can be entered into the network if done correctly. I will have to test that with my Kenwood Console on our UHF statewide system to my radios, but the Icom Ver 2 and nx5000 and 3000 platforms will do upto 4096 sms.
I will put that on the board for sure, because, if we can have a restricted web input to generate Certain “canned” messages to listening radios, that would be a leap ahead of all things NXDN!

IF the MMDVM and hotspot communities put their thinking caps on, I am sure this can be a very powerful, and use tool to the SAR and Skywarn communities.

Please send any comments you may have to info@nxcore.org, I will try my best to get them answered and posted here.

Here is the current list of repeaters and talkgroups, served by the Florida NXCore server. 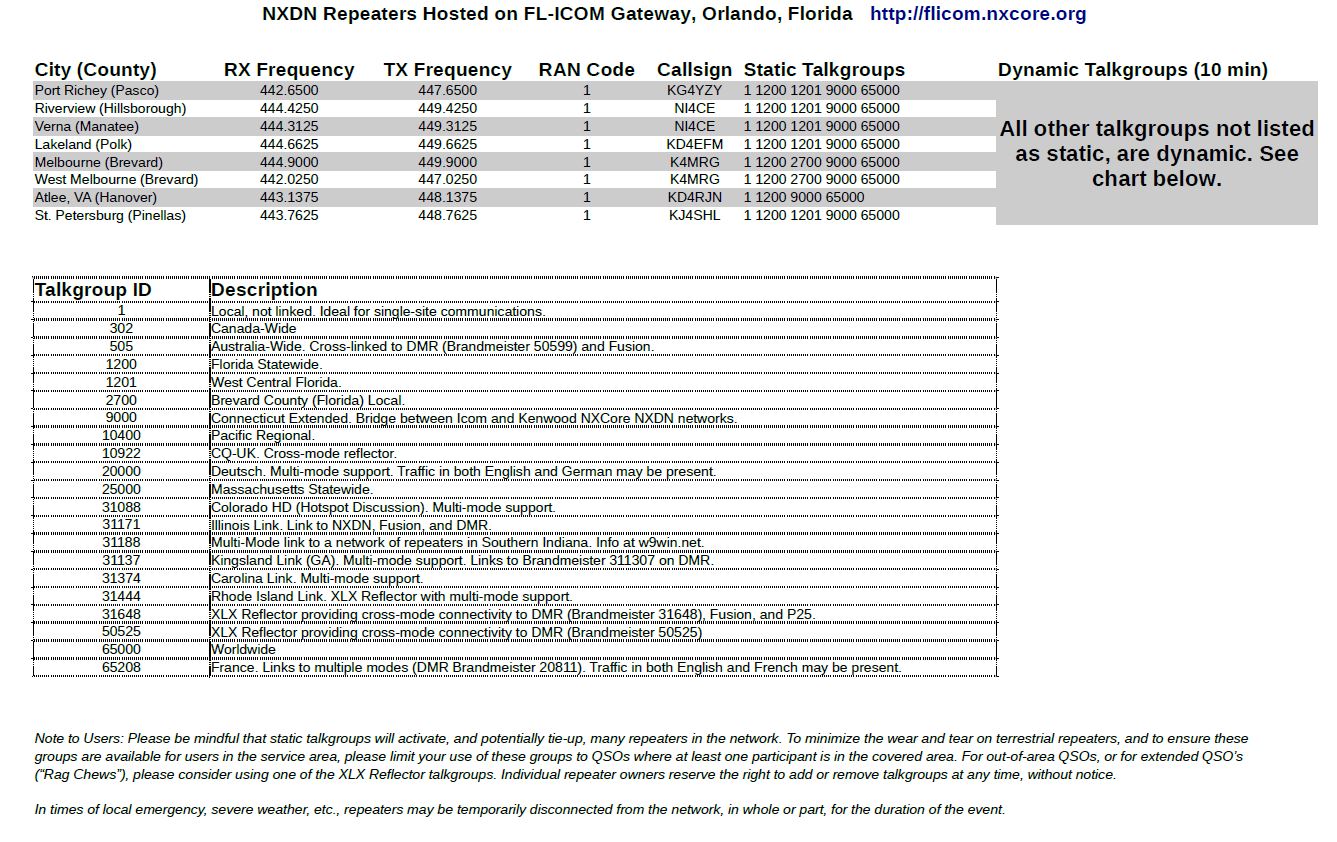 If you’re accessing the network through one of the repeaters in this list, you only need to make sure you have a memory channel programmed for each talkgroup you want to use. Optionally, some radios allow you to select a talkgroup from a list, without needing a separate channel.

Consult the user’s manual for your radio for specific instructions.

All dynamic groups are on a five-minute timer. Every time you key the radio on your desired talkgroup, the timer automatically resets.

This document may be freely shared wherever its information may be useful.

Here is a list of viewable dashboards for the NXDN WW Network.
Thanks to Adrian, VK4TUX for putting this together.

PLEASE SHARE ON FB, PI-STAR, WHATCHAMACALIT, where ever there is use of the kenwoods with DMR hotspots. Thanks.

Okay, after battles and scraps, I want to pass along the follow:

1 Please refer to nxdninfo.com for OFFICIAL NXDN happenings on the commercial
Side of the NXDN WORLD WIDE NETWORK, www.nxdnradio.com is defunct and all
attempts to raise w2bui have failed. Unknown if he is a silent key or not. No one can confirm.
Also my name is Evans, not the minion Kevin.

2 Kenwood DMR with Dual Slot Direct Mode (the latest of most DMR releases) DOES NOT WORK WITH ANY HOT-SPOTS IN SIMPLEX MODE. Do not use it until the creators find a way to incorporate it Into the software. TURN IT OFF. This reverts to the old style of single time slot use. Until further notice.

It is with great sadness to inform our membership that OARC Director Ralph Betts W4ORL has become a Silent Key. Ralph contributed to OARC in a number of ways other than being a Director and he will be truly missed.

This is sudden and a total shock to all those who have known Ralph for years. We do not have any details of how Ralph passed. We will not speculate on the cause and will wait for any official cause to be announced by the family.

In the meantime, please keep Ralph’s family in your thoughts and prayers.

A little video on the Pi-Star

Many have been pointed to the site already, but I need to add a few more notes to this,
the site is http://nxmanager.net If you scroll to the bottom of the page, you will find a block where you enter your information in at.
PLEASE KEEP THIS IN MIND
1 Please use CAPS to enter your information into the database.
2 There are only 65519 UID’s that NXDN technology USES unlike DMR.
3 YES, THERE CAN BE DUPES, but we in some cases use OTAA to transmit our CALL
4 SUGGESTED UID; use the last 5 digits of your DMR ID, that is fine and will work
UNLESS it is above 65519, then you will need to use another numeric.

This is not my rule or evil way of doing things, this is how the CAI of NXDN is laid out.

I know that VHF marine band will transition to NXDN forthcoming, but I hear they are taking out the UID and will have the option to transmit the vessel name or callsign of vessel (rumor is it will be just plain 4800 baud / 6.25 bandwidth digital FDMA, but that could change)

SO, please, kindly keep it within the parameters of 1 to 65519, and even though you CAN enter your full DMR ID, the new database that will be put together forthcoming, will be used to parse your information for the DASHBOARD logs.
Once we have a newer database built, tested and ready for prime use, Bill N2WNS or one of the other admins will chime in and let you know.

I will add this to the Side Links area also.

Thanks and Welcome newcomers!

What is all this buzz about MMDVM and NXDN and ???????? other homebrew kits that are joining the Digital Ham Radio Era?

Well, like most forms of digital technology comes advancement of it. In this case it came from Jonathan Naylor G4KLX and his project for D-Star, Fusion and P25 (aka P25NX).
*I only know of those modes from Jonathan
But for some of you, you already know what it is and does. For others, it’s where you can take micro-computing to the next communications level, and have a “repeater controller” doing all the hard work with simple radio gear, and OR a hotspot 2-way now.

Here is where things stand at the moment, from the MMDVM Yahoo group, by way of Jonathan:
“I have merged he NXDN branch for both the modem firmware and the host into master. This means that the default version of the code is now NXDN enabled.

It has basic networking built-in, talking to the single MMDVM NXDN reflector. I posted details of how to use it a couple of weeks ago. I am working on making the software compatible with the official NXDN amateur network, and in due course, that, along with some form of gateway will be released. At that time the MMDVM NXDN reflector will be retired.

Please note that the extra processing load of the NXDN code means that it isn’t possible to run five modes on an Arduino Due. Aside from NXDN, D-Star and DMR are the next heaviest protocols for processing, so it may be possible to run (say) NXDN and P25 on a Due, and maybe more. The more powerful STM32 and Teensy based systems can easily run all five modes. I believe firmware for the ZUMSpot and MMDVM_HS boards will also be available soon.

In unrelated news. I’ve been adding FCS support into the YSF Gateway and taking the opportunity to clean the code up also. I did a first test this evening trying to log into FCS001-20 but with no success 🙁 It’s early days though.

So with that being said, the next level of NXDN and the Homebrew world is network linking, which is still being tested at this time, though the MMDVM network has a function for linking, it is not currently connected to the NXCore 65000 relm at this time.
I will let you know when that chapter comes into play, but do expect to see a SURGE of new users to say hello to!

I have a note from Johnathan about his project. See Below!!

I converted the MMDVM NXDN implementation over to very-narrow mode, aka NXDN 4800. I decided not to make it switchable to NXDN 9600 as it would then mean that people could choose to make their systems incompatible with existing networks. So NXDN 4800 it is.

It’s all been checked into GitHub for both the MMDVMHost and MMDVM firmware under the nxdn branch.

Currently it’ll be an RF only repeater, but it will allow you to play. I intend to get a simple NXDN reflector active and make a simple NXDN parrot available too. This will allow basic testing and communication until we can do something better.

There is a bug in the display code, maybe Nextion only, where the screen doesn’t update correctly at the end of a transmission, and I can’t find it! So any takers to look at that would be appreciated.

I’ve asked Andy CA6JAU to review my new filters for NXDN 4800 to make sure that they’re correct and that I have transmit amplitude (deviation) correct also. Even if they aren’t, you can try installing it and talking to yourself.